We are Star Dust, We are Golden

By JESSE DAVIDSON Special to the Valley Press,  September 20, 2019 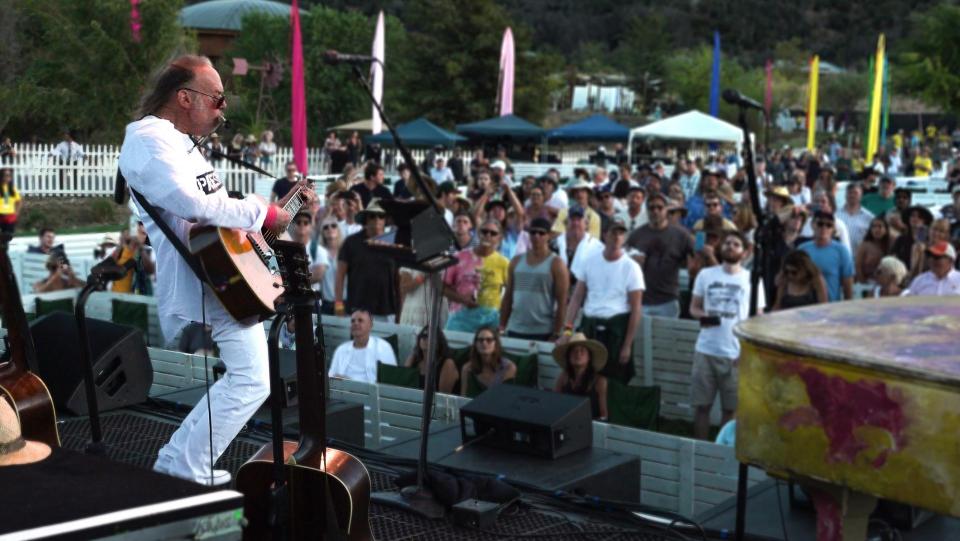 The proudest moments in life aren’t always when something is built. It’s when the canvas is blank and you have infinite directions in which to move.

With my ears still ringing from a long gigging day in Las Vegas, it was time to venture from one desert to another.

Sept. 14 was the big day, the moment I’d waited for with baited breath. The van ride back home gave me time to reflect on what lay ahead. It’s not every day Neil Young, Norah Jones and Father John Misty are playing practically in my backyard, let alone for such a noble cause.

I arrived at the offsite parking at 1:37 p.m., then shuttled to the Turtle. There was a sneaking suspicion that most attendees would be from out of town. The chatter overheard on the bus slowly confirmed this.

“So from here, the 5 meets up in Santa Clarita right?” “We’re really in the middle of nowhere.”

I would’ve felt a bit indignant, but I let it go. Any mental barriers created by geography would evaporate by day’s end. The one thing we have going for us in the Antelope Valley and surrounding cities, is our community. It’s subliminally transmitted through nature — something about being closed in by mountains and hills makes us a bit closer together than the open sprawl of Los Angeles.

Walking onto the grounds, a man on the main stage was giving yoga-like breathing instructions to the crowd. Like the guru that opened Woodstock in 1969, this was an audible sage, burning off any bad vibes present.

All around, people were breathing together — from the very important people in the front, to the general admission in the back. Families, hipsters, hippies both vintage and modern, Deadheads and executives were all together. Everyone was there for the same reasons.

The whole affair was low-key. There were no frills needed. This was the culture cultivated by Neil Young and Lou Adler, one of the event’s key organizers. He and his wife Page founded The Painted Turtle with Paul Newman in  2004.

In the beer and wine area, I spotted him with actor Danny DeVito, on a casual stroll, with no bodyguards, no entourage, just a bright yellow shirt and signature shades. I was a bit apprehensive in approaching him. However, his team had been so gracious in allowing me to cover the event, I wanted to thank him, personally. Upon doing so, he smiled, looked me in the eye and thanked me.

I’d also like to thank the entire festival for providing limitless free water bottles for everyone in attendance. That was a righteous move.

The intimacy of the audience was directly reflected in the production. The sound was some of the clearest I’d ever heard outdoors. When Father John Misty started, it felt as though he was in my living room.

His solo with an acoustic guitar sounded just like it should, with nothing muddying up the mix. As more people filled the audience, the sound quality remained consistent. It also got progressively quieter. Everyone tuned into the same frequency and focused on absorbing the moment. This carried on through Jones’s set, as well.

She decimated us with delicateness. It was just one drummer, one bassist and her singing on a full grand piano for the majority of her set. Even though I was on the middle/left side of the audience, if I spoke above nice restaurant volume, it felt like it would carry all the way to the stage.

Between sets, Masanga, a Zimbabwe-inspired rhythm ensemble, kept the vibe going with their infectious and joyful groove. They are based out of CSUN and are frequent performers at the Painted Turtle, per Adler’s request. Honorary local musician Nick Schutz (The Kris Special) is a member of the group.

Come showtime for Young, a sonic bed had been carefully crafted for his set. Shortly before the start, Danny DeVito appeared on stage to thank the crowd.

“I’m so moved by the spirit and energy of these kids and how necessary this place is for them,” he said.

Although Young played solo, he made his presence known before the first chord. There were two pianos, one, was a baby grand, stage right. The other was an upright, stage left.

On the drum riser, there was an old-looking church organ next to an old Indian statue you’d find in a general store. Three acoustic guitars stood in the center.

Continuing the theme, Young walked out to no grand introduction. He wore all-white with a shirt that said “Preserve.”

“Welcome to the Painted Bridge,” he said, to great applause.

It quickly died down to a sanctuary level of quiet. Everyone sat down on the hillside, listening intently. There would be occasional outbursts (“Neil for president” was my favorite) or the scolding of someone standing up to take pictures and block the view. Overall, it was the most quiet audience I’d ever heard. This was due in part to Young’s performance. He stayed mostly on acoustic for the show and sang into a regular wired microphone on stage. He also had a wireless mic attached to his harmonica, which allowed him to move and sing freely. He was shaman-like, bringing things down to a near-whisper.

You could feel the healing provided by the music with the deafening silence in the audience. His voice would fly from the PA and would bounce off buildings and the mountain behind me and created a natural delay. It was magic.

He finished the set with “New Mama,” which he hadn’t played since 1977 and “Harvest Moon,” with Jones and her backing band.

“Thank you, goodnight,” he said at the end.

The crowd split between leaving and cheering for an encore. After a few minutes and the crew starting to tear down, Young walked back out for one more song. Everyone was excited and began to surround the stage.

A fence separating the VIP area wasn’t going to stop anyone. The stage was rushed not from destruction, but jubilation. Jones came back on piano for Young’s classic, “The Losing End.”

I wanted to cover this show for two reasons. First, I respect what the Painted Turtle does and I’m proud we have such a resource in our community.

Second, I believed this would be a cultural landmark for the Antelope Valley, putting a big dent in the idea that geography creates a vortex in which progress is lost.

In waiting for the shuttle line, the middle of nowhere talk stopped. It became “What a great setting for this” and “The sunset is so beautiful in the desert.”

That’s what I’m talking about. As the saying goes, the best time to plant a tree was 20 years ago. The next best time is right now. Helping our fellow humans, building a community. Right now. The canvas is blank and we have infinite directions.

We are stardust, we are golden. We are billion year old carbon. And we’ve got to get ourselves back to the garden.” — Crosby, Stills, Nash and Young.